It’s My Anniversary! Here’s a Giveaway!

Here’s the backstory: Today is the anniversary of the day I married my son’s father. I’d had the baby a couple of months previously, but marrying him was everyone’s idea of the “right thing to do” – so, on our lunch break (I’d just started working in his family’s company) we went to the courthouse and tied the knot, with the baby drooling on my grey work shirt. I’ve never regretted – and never will regret – my son, but I’ll always regret the marriage. Silver lining? Every second of your life, you’re making a choice. You’re choosing how to spend your time, and who you spend it with. I love Happily Ever Afters as much as the next girl- but staying in a bad situation doesn’t make it better.  Celebrate your every moment!

In celebration of making BETTER choices, I’d like to give you a gift: Love’s Enduring Bond (NOTE: This does NOT mean that I will be your soulmate for life. This is a book, people.) You can enter the giveaway here!

The blurb: A bloody conflict put them on opposite sides, but could not break their bonds of passion.

Elizabeth Warner fell in love with Justin Holt at their first meeting when Elizabeth’s father moved to the Shenandoah Valley to take up a small medical practice there. Justin taught her the joy and passion of love on their wedding night, but war intruded on their bond. When he rode away to war as a colonel of Confederate cavalry, she took their young son and moved back with her father, to nurse Union wounded at her surgeon-father’s hospital in Washington. She tried to put the war and her love of a rebel officer out of her mind until his battered body was carried into her surgical ward.

It’s historic fiction written by Jean C. Keating,a deceased Williamsburg, Virginia author that had diverse interests. She had degrees in mathematics, physics, and information systems; she was Virginia’s Outstanding Young Woman of 1970; she was an aerospace engineer for NASA; she was the head of research for Virginia’s Higher Education Council; she was an animal lover (she especially loved Papillons) – and she was a writer. A writer that was passionate about many things, and wrote this historic romance set during the War of Northern Aggression (For you Yankees, that’d be The Civil War). I never met Ms. Keating, but I wish I had. She lived a full life and maintained hope in Love’s Enduring Bond. Here’s to that.

Check back to see who wins- and be sure to subscribe by email so that I have a way to contact you about getting the book to you!

The Kingmaker’s Daughter is finally out!

Book 4 in the Cousin’s War is out! If you’re a historic fiction/romance reader and you don’t read Philippa Gregory novels yet, you should! Philippa Gregory writes well-researched, engaging first-person novels about prominent historic figures, particularly those in high positions in the British Monarchy. You can check out my last review of her stuff (I skipped blogging Lady of the River, even though I read it and loved it). I bought The Kingmaker’s Daughter today and will write more about it after I get through a bit more of it. Meanwhile, you can get it here. Happy reading!

The Book of Air and Shadows

I didn’t pick this book up because it was on the New York Times Bestseller’s list. 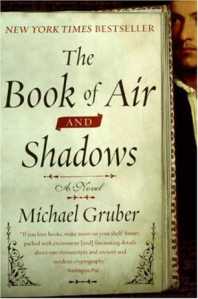 I picked it up because in search of picnic reading, I was walking around a local bookstore willing something to jump out at me and take me off of my rotation of the same writers, and this book did. Encouraged by USA Today’s assertion that the book was “Breathtakingly engaging… brilliant… Few [thrillers] will surpass The Book of Air and Shadows when it comes to energetic writing, compellingly flawed characters, literary scholarship, and mathematical conundrums. Air and Shadows is also incredibly smart… unpredictable… We never had this much fun reading the Da Vinci Code”, I grabbed the book and headed for the river.

Sure enough, this book is considerably more thrilling than The Da Vinci Code. At over 460 pages, it reads something like a cross between James Bond (the new ones) and Shakespeare for Dummies: easy but engaging. (I know, some of you are saying easy is engaging. Stay with me, here. The plot-line is tiered, and requires your attention.)

Opening scene: A bodybuilding IP (Intellectual Property) attorney (Mishkin) is in hiding, waiting for the mob to come and get him. He begins writing a letter to his estranged family to pass the time.

Now, rewind. Albert Crosetti is middle-age-ish and working at a bookshop. He loves greasy food and old movies, and he lives in his mother’s basement. He spends his spare time obsessing over another bookstore employee: Carolyn Rolly. Lucky for him, there’s a fire in the shop. This means he gets to spend a night at her place (an abandoned warehouse), helping her try to restore a valuable book for unlawful gain. In this classically bohemian evening, they find a surprising series of pages padding the covers of the book. Pages that might possibly lead to the discovery of a heretofore unknown Shakespeare manuscript.

Crosetti begins investigatng, but compromises on selling a letter to a previously dethroned Shakespeare expert, who, then being chased by mysterious and dangerous men, carries his discovery to Mishkin (the attorney). The circle isn’t complete with this, but I won’t confuse you with further details from this point.

Murder, intrigue, ciphers, grills, IP law, speculation on Shakespeare’s life, plenty of action-packed fights and a few juicy sex scenes (not to mention the mafia and religion bits) make this book  worth a read, if you’re intrigued by what you’ve read so far. This is an excellent read for the lazy intellectual that would never read Shakespeare but might like to sound knowledgeable in conversations with more literary folks.My personal opinion: pretty good. I’m passing my copy along to my grandmother; she reads a lot of James Patterson and historical fiction, so this interesting combination piece might be right up her alley.